Production Activities in the Household Economies of Plantation Slaves: Barbados and Martinique, Mid-1600s to Mid-1800s

Formerly British and French colonies, the eastern Caribbean islands of Barbados and Martinique were major players in the early development of European overseas empires dependent on African slave labor and the large-scale production of sugar. Utilizing documentary and archaeological data we discuss and compare the independent production activities or household economies of plantation slaves on these two islands. The household economy was one of the more prominent aspects of plantation slave life throughout the Caribbean, and in this paper we examine the multiple adaptive production strategies slaves employed to ameliorate the poverty of their material and economic lives.

A Seventeenth Century Commentary on Labor and Military Problems in Barbados

Posted on 2012 by Jerome Handler

The anonymously authored manuscript reproduced below * was written in late 1667 (or early 1668) towards the end of, or shortly after, England’s war with the French and Dutch. Barbados was approaching the peak of its economic prosperity and its preservation as an English possession was of great concern; it was especially important that the island be able to defend itself militarily. Aside from the condition of Barbadian fortifications, the militia was, to many observers, considerably weakened by the decline in the European population, especially the poorer elements upon whose services the militia depended for its effectiveness.

The very forces that had been responsible for Bardadian economic prosperity now militated against retention of the island’s European population. The expansion of sugar plantations debilitated the small land-holding system, thus depriving many poor Europeans of what had primarily motivated their coming to Barbados in the first place; or, in the case of indentured servants, of what had encouraged them to stay when their period of service was over. With the loss of Europeans and the concomitant rise in dependency upon African slaves, it became increasingly difficult to fill the host of artisan and other specialized roles needed for the maintenance of sugar plantations. Plantation owners began to fill these positions with their slaves, thereby further lessening opportunities in the island for poor Europeans.

Posted in Barbados History and Society: Bibliographic and Miscellany | Tagged Barbados, labor problems, mililtary problems | Comments Off on A Seventeenth Century Commentary on Labor and Military Problems in Barbados

Posted on 2011 by Jerome Handler

Starting in Jamaica in 1760 and continuing to the present, scores of laws criminalizing obeah have been enacted in the 17 jurisdictions of the Anglophone Caribbean, the former British West Indies. These laws include laws solely concerned with obeah — so-called “Obeah Acts” or “Obeah Ordinances” — as well as anti-obeah provisions in sections of Penal Codes, Criminal Codes, Police Acts, Vagrancy Acts, and Summary Jurisdiction Acts. This paper gives a comparative summary of the main features of anti-obeah laws from the period of slavery to the present.

Posted in Obeah | Tagged laws, Obeah | Comments Off on Anti-Obeah Laws of the Anglophone Caribbean, 1760s to 2010 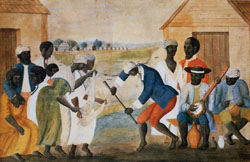 Today, in a handful of Caribbean islands (e.g., Jamaica, Martinique, Barbados, Antigua, Nevis, and St. Lucia), persons of African descent continue to manufacture earthenware pottery, generally somewhat loosely and variously referred to by modern Caribbean archaeologists as Afro-Caribbean pottery or ceramics. These small-scale industries have always played an insignificant role in insular national economies and at present they seem to have a very limited chance for long-term survival. Today they produce largely for the tourist market and are disappearing to varying degrees. Several of these industries have been ethnographically reported over the years, and these reports provide a base line from which to examine the changing demands and pressures confronting local potteries. Diachronic studies of these industries permit researchers to chart changes as these industries decline, and also provide a lens through which archaeologists can understand the ways in which local craft industries have confronted changing economic landscapes. Moreover, traditional locally made earthenware is today found in historical archaeological sites in the West Indies and ethnographic knowledge about local industries helps interpret the archaeological data. The following information on the little-known industry in the small island of Antigua, a former British colony in the Leeward island chain — today an independent member of the British Commonwealth — is based on limited field work, published literature, and personal correspondence with persons possessing first-hand knowledge.

This paper describes the houses and household furnishings of the enslaved people on Barbadian sugar plantations, and traces the development and changes in architectural forms, including wattle-and-daub, stone, and wooden plank dwellings, over the several centuries of slavery on the island. We also treat the housing policies of plantation owners/managers, and explore possible African and European cultural influences on the Barbadian vernacular housing tradition that emerged during the period of slavery.

The Middle Passage and the Material Culture of Captive Africans

2009 (Jerome S. Handler) “The Middle Passage and the Material Culture of Captive Africans.” Slavery and Abolition 30: 1-26.

Scholars of the Atlantic slave trade have not systematically addressed the question of what material objects or personal belongings captive Africans took aboard the slave ships and what goods they may have acquired on the Middle Passage. This topic has implications for the archaeology of African descendant sites in the New World and the transmission of African material culture. This paper reviews the evidence for clothing, metal, bead, and other jewelry, amulets, tobacco pipes, musical instruments, and gaming materials. In so doing, the paper provides an empirical foundation for the severe limitations placed upon enslaved Africans in transporting their material culture to the New World.

Gizzard Stones, Wari in the New World, and Slave Ships: Some Research Questions

Argues that archaeologically recovered so-called gizzard stones were not utilized for playing wari, the African board game, by African descended populations in the United States, reviews documentary and ethnographic evidence for the presence of wari in the United States and the Caribbean, and discusses the documentary evidence for the presence of African games aboard British slaving vessels during the Middle Passage.

Escrava Anastácia: The Iconographic History of a Brazilian Popular Saint

This article describes the transformation of an image depicting an unnamed, enslaved African man wearing a metal facemask, a common form of punishment in colonial Brazil, into the iconic representation of the martyred slave Anastácia/Anastasia, the focus of a growing religious and political movement in Brazil. The authors trace the image to an early 19th century engraving based on a drawing by the Frenchman Jacques Arago. Well over a century later, Arago’s image increasingly became associated with a corpus of myths describing the virtuous suffering and painful death of a female slave named Anastácia. By the 1990s, Arago’s image (and variations of it), now identified as the martyred Anastácia/Anastasia, had proliferated throughout Brazil, an object of devotion for Catholics and practitioners of Umbanda, as well as a symbol of black pride.

The Atlantic Slave Trade and Slave Life in the Americas: A Visual Record

2009 (J. S. Handler and M. Tuite) The Atlantic Slave Trade and Slave Life in the Americas: A Visual Record.

The approximately 1,235 images in this collection have been selected from a wide range of sources, most of them dating from the period of slavery. This collection is envisioned as a tool and a resource that can be used by teachers, researchers, students, and the general public – in brief, anyone interested in the experiences of Africans who were enslaved and transported to the Americas and the lives of their descendants in the slave societies of the New World.